Q: Japanese usually study English as a life-long activity, but most people never feel comfortable. Some of our members have been sent to a branch abroad with a TOEIC score of around 600, and really have a hard time communicating with local people. Do you have any idea why Japanese learn English slower than people in other countries? Is there anything unique in the way Japanese people learn English?

Not only was that deathly boring in the classroom, it was also counterproductive because what happens to the student was to develop the feeling if I don’t understand 100% , I don’t understand perfectly…. I don’t really speak it. And in Japan, 「とりあえず黙っているのが安全」so it’s just safer to be quiet. All of the things come together, there was a storm to actually prevent people from acquiring the language. One of the things we use in the training, I will ask the participants … kind of a strange activity, but please co-operate, OK, everybody raise your hand. Can you use MS-Excel? Of course everybody can use MS-Excel. So it’s a stupid question. OK, my next question, how many are you experts at using Excel? You have a black belt. You are a master. You can answer any question. You could deliver a course by yourself. Of course nobody raises their hand. So the point is “かなり適当に使ってる” kind of “思考錯誤” .

If you see something you don’t understand, you talk to your “Senpai(先輩)”, google to get information…. You don’t panic. Excel is just a tool for your business, and in the same way, English is just a tool also, it doesn’t have to be perfect. For example, in Brazil, as a tendency, Brazilian people do not speak English very well, however their communication abilities are very very high because they don’t hesitate. They don’t worry about being grammatically correct.

So one of the things that needs to be change in Japan is … I’m not saying grammar is un-important, grammar is important but grammar should not be the focus. Communication should be the focus. And what is starting to happen now I feel is shifting away from being perfect, “English is a test subject to measure your suitability to go to the next level” That idea is gradually disappearing and what is replacing it is a much more positive trend I feel. English is a tool for communication. So the reason why Japan is behind is because of that mindset as to how English was taught. And the good news is that mindset is changing.

The biggest hurdle is mindset. In practical terms, if you think about your English ability, Reading, Listening, Speaking, Writing. Without doubt, most Japanese struggle with speaking. And one of the reasons I think people think they can’t really improve their speaking ability is, they feel they don’t have enough opportunities, but I don’t agree with that. When I first came to Japan, it was true, there were very few people who spoke English. Now English is available everywhere. If you look for the opportunity, you can make it. So I think there are many things for example “language partners”, when I was at ICU, many students who were clever would go to Ito-Yokado in Musashisakai. Every store has a kind of bulletin board. “Language partner wanted” to look for somebody from overseas. One day a week, 2 hours, the first day, they can speak English , and the second day, they can speak Japanese. So there is a win-win situation for both people. Or Skype English lessons are really good programs. You spend 5000 yen or so per month, and you can speak almost every day. So there are more opportunities.

Q: What advice would you give to someone who works hard at improving his/her English ability but feels he/she is getting nowhere?

The biggest hurdle is the mindset. People need to change their mindset. Think of English as a tool for communication. Advice to someone who works hard to improve, but not really improving… look for more opportunities to actually use English. I think there are many people who don’t feel any improvement. There are a couple of possibilities.

One possibility is “They are simply studying at a desk” by themselves with textbooks.
No matter how good the textbook is, there is a limit to how much you are really going to be able to improve your English. Actually use English. Get out from the desk sometimes and engage with people in English. Join the conversation class, for example, English café. There are places you can use English.

To be honest, there are some people who are just struggling to learn a language. Some of my close friends who have been in Japan for a very long time, don’t speak Japanese very well. For some reason, for some people, they don’t acquire languages after they become adult. But those people are very few and far between. I think most people, if they make an effort to actually put themselves into English speaking environments, their English will improve. And the more you improve, the better feedback you receive, so this is a chicken and egg situation.

Next →An interview with Robert Hilke – ４. English formality 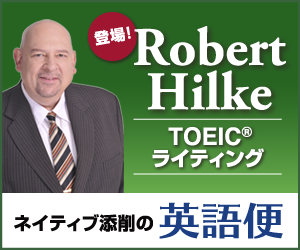